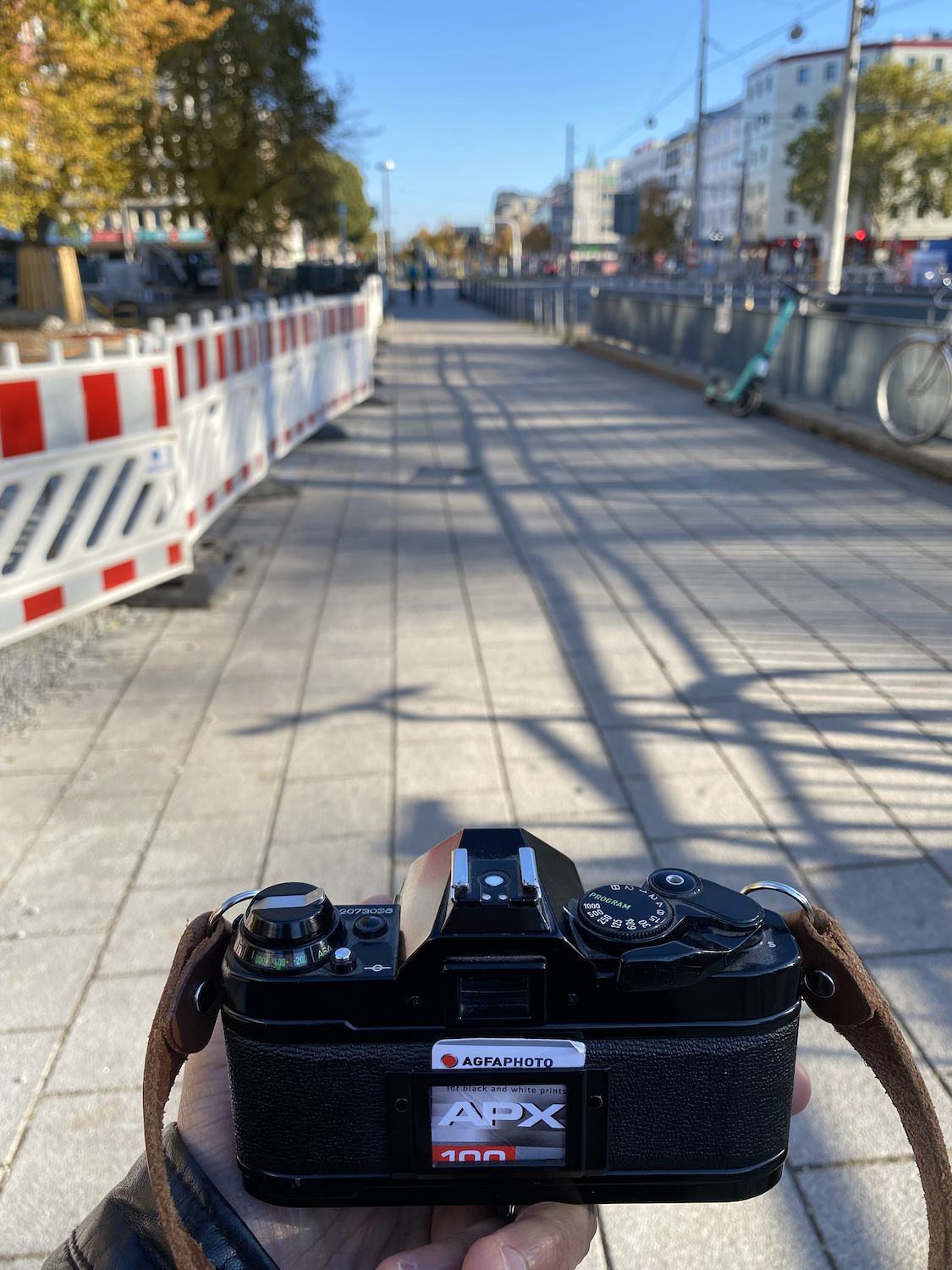 Yesterday while at the mall, I picked up a roll of Agfa APX 100 on a whim while I grabbed some other things from DM. Being that it’s a drug store, there isn’t a wide selection of film, so I took what was available. That slow-burning urge to get out and shoot again has been calling me for a while, and it was time to obey as it’s something that is genuinely missing from my life. Knowing I’d be headed out into the city early this morning, I dusted off the old Canon AE-1 Program, loaded up the film, set the ISO at 400 to give me a little more latitude, and prepared to get back to work.

Eliana and I were greeted by a crisp fall morning as we walked out to catch the Straßenbahn; a light frost on the cars, and lots of sunshine. We had one of our usual discussions about life during the quick trip downtown, and in between catching the second tram I snapped a few frames. After about two shots, it felt like I’d never put the camera down. I’ve been taking photos daily with my iPhone 11 Pro, but it’s just not the same experience as having a true analog or digital camera despite the amazing leaps in camera phone technology. There’s something about the craft that a phone will never replicate for me. Although my eyes are set on the Fujifilm X100V as my next digital camera, my Canon has never failed me when I just want to hit the street.

Our destination was Jungbusch for a workshop led by Nationaltheater Mannheim, and it was my first time walking the streets there (I’d driven through before). Some would call it a gritty, dangerous area or what have you–if you choose to look at it that way. It honestly reminds me of DC when I left in 2003–rough in some places, outright dangerous in others regardless of the time of day, but full of beautiful culture if you respect people from all walks of life and know what you’re experiencing. Gentrification was just beginning take over DC during the time; the masses of people of color (and our businesses) hadn’t been displaced yet. When I returned for a visit in 2015, much of the city was unrecognizable to me. I’m told the difference is even more drastic now.

Some of the telltale signs I noticed back then in DC were present in Jungbusch today: large, upscale buildings that didn’t match the immediate surroundings, abandoned buildings with historic charm & huge potential, and people who seemed out of place jogging or casually strolling amongst the native residents. From there you know it’s just a matter of time before the vision spreads out. I’m no expert on the area of course, so I look forward to learning more from people with true ties to the community. I’ve read about the fierce opposition to gentrification in Berlin.

While headed back home for a bit, I stopped to take a photo rather than crossing the street while I had the right-of-way. A gentleman (rather far away from me) stopped on the sidewalk so he wouldn’t interrupt my frame. He asked if I got it, then smiled when I told him “Yes” and thanked him for his courtesy. He was intrigued by the camera and asked if it was old. I replied “Yes, and old film camera.” He smiled again, gave a thumbs up, and said “That’s good!” as he walked off.

Minutes later I met a local Hip-Hop artist named Junior. While walking to the same tram stop, we exchanged the customary nod that Black folks give when crossing paths in a foreign land. As we waited at the stop, I lowered my camera when a potential image didn’t pan out for me, and he quickly asked if he could see the shot. I told him I didn’t take one, but that it was a film camera anyway, which set the conversation off as we boarded. He shared that he and other artists are always looking for photographers to work with and wondered if I shot professionally. I told him I didn’t really shoot professionally; that it was actually my first time out shooting in about four years. Curious about his music, I asked if he was on Instagram and we swapped info. He was impressed with my images and we talked briefly until he got to his stop. I was pleased to learn that the Hip-Hop scene in Germany has more Black artists emerging through the industry that’s been mainly dominated by artists of the Turkish and Arab diasporas.

And just like that the gift of photography immediately allowed me to connect with new people after a long hiatus. Usually being the type to head straight from point A to B when I’m out and not interact much, I’m seeking to change that regardless of how paranoid people act these days. The camera has gotten me into more doors, minds and hearts than can recall or maybe even realize. That’s why I’m convinced it’s a calling and not just a hobby. I’ll of course add the images from today here after getting them developed & scanned. I highly recommend Mein Film Lab if you’re in Europe.