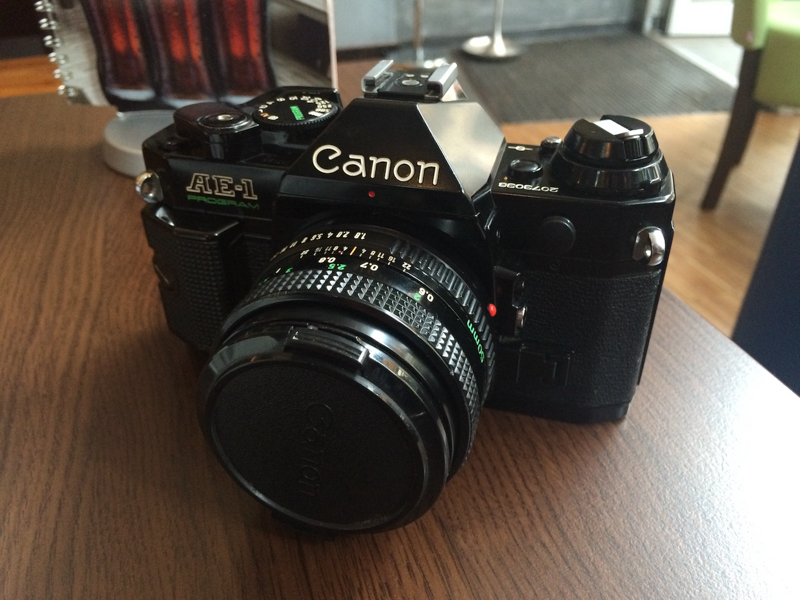 Update (29 MAR 2017): I’ve learned quite a bit since writing this post, the most important lesson being that my comments about the look of the color film were incorrect; in reality, I just hadn’t nailed the exposure properly. I consider this post a slice of time on my journey to mastery, so I’ll leave it as is. Just keep these things in mind as you read on.

Film always has and always will intrigue me; nostalgia is the immediate thought which comes to mind. While I cannot completely translate the feeling, there is something hypnotizing about sifting through negatives and old photographs. It’s something I remember doing quite often as a kid. I have yet to enter a darkroom, but I believe just having knowledge of that crucial step is part of the intrigue–to know there is a complex, if not magical process involved in getting an image from capture to final print.

I never learned any of the basics on film honestly, and in retrospect, I should have gone there first. The part of me that vividly remembers life before the Internet thinks that there is something a bit lost in the immediacy of digital. For instance, I think constant CHIMPing is one of the worst things a new photographer can do; it’s a distraction more often than not. You learn a lot from taking a shot, writing down your settings (most of the time), seeing the print, and learning what you did right or wrong. Then there’s that element where if you eff up a frame (or an entire roll), there is no do-over–just money blown and hopefully lessons learned. I love that reality. Without the safety net of advanced electronics, you have to (at the very least) get better at technical execution. Vision is another thing.

When I began really digging into photography, I sometimes wondered why some seasoned photographers chose to stick exclusively with film in this digital age. I at once thought it odd and alluring, as though they were privy to something I hadn’t yet earned the right to know. I get it now; I’ve developed a greater appreciation for the art. From a practical standpoint, I will continue to employ both avenues. However, film for me will always represent the true essence of photography.

The thought of slowing down sparked my interest to revisit film, so after a bit of research I settled on the Canon AE-1 Program. Oddly, I haven’t, nor do I care to use the “program” function (I prefer full-manual even with digital), but I found a very well-maintained copy with the 50mm f1.8 lens for a good price on eBay.de. It even had the original 1981 purchase receipt from Karstadt which I thought added to the nostalgia.

Side Note: I preferred the all-black version, but didn’t realize I’d gotten lucky. I’ve been stopped on the street more than a few times by photographers who tell me how beautiful the camera is.

A Quick (Non-Technical) Review of the Camera

While I won’t do a scientific gear review as that’s not really my thing (the camera is basic anyway), I will say I love shooting with it. With the 50mm lens, it’s a light combination that I can carry all day whether in my hands or using my own leather strap without getting annoyed. It’s a bit larger than my Olympus OM-D E-M5, but smaller than most DSLRs, so it feels less intimidating when I use it on the street. People seem more intrigued than bothered by it.

The build quality is pretty decent; brass top and bottom plates, but the rest of the camera is mostly plastic. It’s held up very well to be 34 years old though. The viewfinder is slightly hazy, but still clean and clear enough for me to focus and shoot without a problem. Film loading, advancing and winding are smooth enough for a novice like me. I haven’t shot a Leica M6 or anything yet, so I don’t have a legit reference point. I’ll get there soon enough.

The 1/1000s max shutter speed made me quickly get acquainted with pushing and pulling film, which I like because it forces me to think more critically and creatively; the ISO range of 12-3200 offers more than enough latitude to experiment. Coming from digital the shutter button is a bit soft for me, but I never find myself tripping it too early or missing shots. Just takes a little getting used to, as does the shutter sound. It isn’t terribly loud, but it’s not that polite either. It’s definitely not my go-to in a quiet setting.

Primarily, this is just my take on the experience of shooting film again and learning along the way. For film I chose what was available locally to start–no Kodak Tri-X or Ilford Delta to be found. Below are a few samples of the outcome. After having the film developed and scanned by Foto Bleh (a local camera shop in downtown Kaiserslautern), I imported into Lightroom 5 only to add metadata. None of the photos are retouched.

All photos in this series were shot with the Canon AE-1 Program with 50mm f1.8 lens available from multiple sellers on Amazon.

Kodak Gold 200 is just one of the films I saw and wanted to try out. I’m no expert, but I’m not impressed with it. I like the desaturated look that it has, but the tones and contrast look a little odd to me. Some might like it, but I won’t buy it again.

The Kodak Ektar 100 is one I’ll definitely buy again. It has the slightly desaturated look lending to the nostalgic feel, and the tones are more consistent. It also seems to have a greater latitude for error. There were shots I just had a bad feeling about, but they turned out okay.

I’m partial to black & white, so the Ilford HP5 Plus 400 wins me over here; I love the grain and contrast. I did end up overexposing more frames than I expected, so maybe this one isn’t so forgiving. I hear the Ilford Delta 400 beats it, so that’ll be my next purchase.

A couple of very talented film shooters I’ve come across recently are Lester Cannon (check out his features on The Phoblographer here and here) and Rolland András Flinta, both out of Germany (by way of Cali and Hungary respectively). Warning: some of their images are NSFW, but they both have a fine-art approach towards nudity. If you’re comfortable with that, you shouldn’t take offense. Take some time and check out their work.

If anyone has any insight to offer regarding archiving, film types, other film shooters, etc. please share. I know I’ll invest in my own negative scanner in the near future. I’ll also get into medium format at some point. I’m eager to hear from anyone who still loves shooting film.